The Warrandyte Mechanics Institute Hall on the corner of Mitchell Avenue and Yarra Street turns 94 years old in 2022, althought the Institute goes back to 1881 or even 1878. It has had three separate venues and several stages of development in that time and now, in year 141, it is a thriving organisation, proud of its venue and its role in the community. 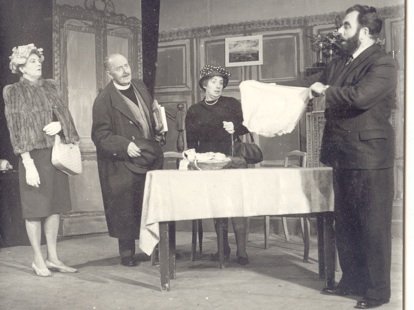 It began when the Andersons Creek Community School, no 12 (now called Warrandyte Primary School) moved to its new building in 1875, as a result of a petition to the Minister for Instruction, requesting the use of the old school building to enable local young people over 15 to continue their studies. After delays, trusteeship was given to three nominees to maintain the building as a Mechanics’ Institute. This may have been as early as 1878 for an Evelyn Observer advertisement in 1882 indicated that “The Warrandyte Mechanics Institute Free Library is open”.

The building, in poor state of repair, soon became unsuitable for an institute, especially as Mechanics Institutes were starting to move their focus to providing venues for meetings and community entertainment as well. Consequently, a new hall was built on Crown Land on the North West corner of Yarra and Ebb Streets (where Spencer-Martin Real Estate office is now), with a successful opening in 1890 where locals provided music, recitations and a performance of the farce, “Spinks the Baker”.

This old hall served the community for 35 years for regular dances, weddings, meetings and silent movies, but by 1925 it was becoming too small for the growing community an d fundraising began for a replacement. A splendid site, made available when the Warrandyte Hotel on the corner of Mitchell Avenue and Yarra Street was destroyed by fire in April 1925, was purchased and the new hall was opened in April 1928.

In its next phase, the hall was still used regularly for dances, deb balls, Lilac Time Balls, New Year’s Eve dances, meetings, weddings and also as a cinema up to 3 times per week until the advent of the drive-in in the 50s. During the war, it was used for fund raising events for patriotic purposes and it also served as a Bush Fire Relief Centre during the Black Friday fires of 1939 and again in 1962. It was shortly after this that the timber building at the rear of the Hall was built as a Group Headquarters and radio room for the Warrandyte Fire Brigade. This same building became the Pottery Studio when the New Fire Station was built in Warrandyte in 1881.

The committee added the porch, toilet block and meeting room in 1956, but with lack of revenue from film screenings, it was struggling to maintain the hall and its sale to Council was even considered. The saving of the Hall was brought about by the formation of the Warrandyte Arts Association (WAA) in 1956 – an umbrella association of drama, music, craft, painting and pottery groups. The association was born as a result of a public meeting in Nov 1955 and the various groups emerged over the following months. Warrandyte was relatively distant from the city in those days and so the association grew rapidly and played a key role in the artistic opportunities for the community. Not only could local people participate in the various groups, but professional musicians, for example, were brought out to perform in the MI Hall. WAA members maintained the building through fundraising, sale of debentures, loans from committee members, hours of voluntary labour and, above all, the drive to maintain the Hall. At a public meeting in 1986, WAA was given the go-ahead to take over the full responsibility of the Hall and a new, incorporated association – the Warrandyte Mechanics Institute and Arts Association – was born.

Grandiose plans for extension as a fully fledged theatre with foyer, exhibition space, storage etc were not fulfilled. However, the association has devoted hours of work and thousands of dollars raised from theatrical productions, especially the annual Festival Follies, exhibitions and sales to undertake major refurbishment and purchase of equipment. Renovations began in 1991 and include, re-stumping, re-plastering and lining, insulation, internal and external painting and electrical work, installation of ducted heating, purchase of a new piano and lighting equipment. This involved a huge investment of money and countless working bees and fund raising concerts by members. The renovations have continued into the 21st century with the purchase of a new sound board, new tables, new chairs, new stage curtain, refurbishment of the committee room with cupboards, benches and flooring, installation of air conditioning, re-roofing and external painting and the creation of a garden with ramp access depicting the activities of the association through mosaics and dedicated to the memory of an outstanding volunteer.

More additions and improvements include the sealing of the rear car park, a professional building check for asbestos and some resulting modifications, purchase of additional theatre lighting, digital equipment and a motorised screen as well replacement of the rear stage doors and improved access in general. The cost of this work has been raised and reduced by the efforts of association members, but WMIAA Inc also wishes to acknowledge financial assistance from Manningham Council, Nillumbik Council, the state Community Fund and the Warrandyte Branch of the Bendigo Bank. In 2009, the association was the recipient of a major grant of $50,000 from the Bendigo Bank (Community Enterprise Foundation) towards a major project to upgrade the foyer and toilets and install rainwater collection, with a further $12,500 in 2010 towards the completion of the project. This work was completed, and now additional improvements are made each year, such as the installation of a toilet in the pottery studio, improved theatre lighting and digital sound and light equipment, a rear deck and termite prevention work. The Hall has never looked better, either inside or outside, or from the front or back.

A collection of photos of the hall (and documents related to it) over the years can be found by clicking the images below:

The Hall over the Years (1)

The Hall over the Years (2)

It is always a very great pleasure to cordially endorse and encourage anything that tends to give legitimate entertainment and amusement. The Warrandyte Variety Troupe, composed of several respectable young amateurs fond of music, singing, etc., and anxious for self-improvement, determined to give a series of entertainments, and their initial performance (in aid of the Warrandyte Mechanics' Institute), which took place last Friday evening, although the result of but few rehearsals, fully warranted their action. The troupe, consisting of Messrs. W., A. J., and J. A. Manning, W. Watkins, A. Livingston, C. Rose, and George Treadwell, were introduced to the audience by Mr. C. A. Blair, who, in a few well chosen words, thanked them and the public for their patronage in supporting such a good cause.

The whole of the troupe possess voices considerably above the average, and in spite of the poor acoustic properties of the Hall, the songs went off in, first-class style. With everything running on so evenly it is hardly necessary to particularize. Mr. G, Treadwell, although young in years, is evidently old in piano playing, and with Mr. C. Rose on the violin, gave great satisfaction; his overture in the second part being a brilliant performance.

Nearly the whole of the songs were new to the place. The coster song, "Round the Town" (in character), by Messrs. W. and J. Manning, was rather an innovation, and was heartily cheered. Mr S. Graham's clog-dance brought a hearty encore and was followed by an Irish jig. As the troupe intend give a series of entertainments in the district we can safely recommend those who wish to spend a pleasant evening to patronise them. The following is the programme :-

The ordinary side business and jokes were quite up to the mark.

This was very creditably played, and caused considerable amusement. The ball was well attended.