About the Music Group

The Music Group formed in the first year of operation (1956) of WAA, with musical evenings in private homes, monthly record nights, a choir and recitals in the Hall.

During the 60s, when Warrandyte was still relatively isolated from the city, celebrity concerts were conducted regularly in the Hall, bringing a professional level of music to Warrandyte. These were mainly organised by Ann Arnold.

After the Arnolds returned to Warrandyte in the early 70s after a few years overseas, music nights began to flourish again and then another period of musical activity occurred between the late 70s up until the nineties with the energy of some new leaders. The Anderson organised some major productions including three Sing-along Messiahs, complete with orchestra and soloists and a special Christmas Medieval Night. David Crockett and Renee Maddocks created ‘A Bush Christmas” and numerous people banded together for “Peace and Harmony”. Barry McKimm brought two wonderful “Octubafests” to the Hall. Probably the most comprehensive production was the “Bach & Handel Tercentenary” celebration devised by the Andersons, comprising a dramatised narrative, voiced over with snippets of recorded music as well as live music (choir, orchestra and soloists both young and old) from the major works, all set against a background of slides of famous paintings of the era projected on the wall. 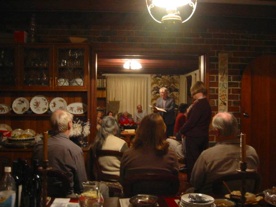 Doug Macrae and the Linda Mitchell took turns in running the group, Doug organising many fund raising concerts to help fund the purchase of the new piano and the pending hall renovations, and Linda running a WAA choir.

Since the mid 90s, the music group has been less active. Informal music nights wax and wane with the arrival and departure of new blood in the area. People are busier and there are many more musical opportunities for people in the community through the schools and community choirs. Musical activity still flourishes within the Theatre Company under Richard Pengelley’s masterly direction.

Hopefully will blossom again in the future.

A gallery of photos from the Musical Group can be found here.